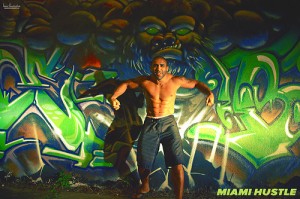 I’ve been following Genghis Con’s highlight videos for quite a while now. I’ve posted some here, here and here if you were looking to update yourself with his work. In short, the guy is a genius at what he does and posted below, you’ll find the first episode of his (hopefully) ongoing MMA reality series entitled “Miami Hustle”.

The series will give us an inside look into the training regime and personal lives of a few of the fighters from the American Top Team (ATT) gym in Coconut Creek, Florida. In this particular episode, we get some behind-the-scenes footage featuring Jorge Masvidal, Gesias Cavalcante (JZ) and Alexis Vila. Their strength and conditioning coach, Juan Carlos Faraldo, has a pretty prominant role in the episode as well.

We get to see Alexis Vila’s little boy who has taken to MMA without any “push” from his dad. “He just sees it and does it” they say. We get to see Juan Carlos Faraldo hopping “islands” in a pool to make a quick hundred bucks off a bet with Masvidal. We get to see the difference between Cavalcante’s and Masvidal’s breakfast and work ethic and of course, we get to see a bunch of training footage from the American Top Team facility. Here’s the first episode and below that, there’s a trailer for episode 2. Check it out..