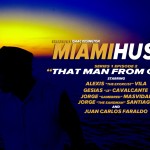 Last week I posted up the first episode of the “Miami Hustle” series that profiles the lives and careers of Jorge Masvidal, Cesias Cavalcante, Jorge Santiago and in this particular episode, which is entitled “the man from Cuba”, we get an inside look into the fight preperation and personal life of Alexis Vila. Alexis is currently undefeated at 9-0 and being a high calibre wrestler (he won a bronze metal for Cuba at the 1996 summer Olympic games), he’d likely be a huge superstar if the UFC was ever to introduce a 125lb weight division.

The video below shows some clips from his latest fight against Lewis McKenzie. Prior to the fight, Alexis predicted that he’d win in the second round and sure enough, that’s exactly what he did. These “Miami Hustle” episodes are posted up every Monday on http://www.genghiscon.wordpress.com so you can watch them directly on “Genghis Con’s” site if you don’t feel like waiting for me to post them up on here.