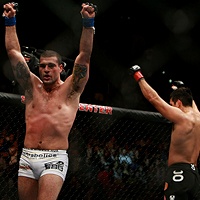 Back at UFC 104, Mauricio “Shogun” Rua and Lyoto Machida went the distance in a gruelling 5 round battle. When the decision was announced, the viewing audience was shocked (myself included) as they witnessed an undeserving Lyoto Machida getting his hand raised. Don’t get me wrong, both fighters fought with a lot of heart that night but practically every media outlet (including the Fight Metric and Compustrike stats) scored the fight in Shogun’s favour.

“Shogun” was about a 4-1 underdog in the fight (I know because I personally lost my money) and with betting odds like that, there’s a lot of casinos/bookies who stand to lose a lot of money when a heavy underdog pulls out a victory. Take from this what you want, but the “Fertitta” brothers – who are the majority owners of Zuffa (which is the corporation that owns the UFC) – also own “Station Casinos”. So, there was a lot of money on the line during the first fight and the people that stood to potentially lose a substantial amount of it happened to be in a position-of-power where they were able to manipulate the outcome.

Anyway, there’s no use crying over spilt milk so I’ll overlook the politics and shadiness of the first fight for now and just focus on the rematch that’s set to take place in a few weeks. To this day, I view Shogun as the light heavyweight champion and he “beat” Machida during their first meeting by implementing a near-perfect game plan.

Machida, as we all know, is extremely illusive and the majority of his opponents have a very difficult time hitting him. Shogun recognized this and rather than swinging for his head, he attacked Machida’s body and legs instead. After all, it’s a lot easier to step back and avoid a punch to the face then it is to avoid a kick to the thighs or the body.

However, since Shogun was able to devise the perfect game plan to “beat” (though not officially) Lyoto Machida for the first time in his career, it’ll be very interesting to see how Machida rebounds from it. Machida is known for being a very smart fighter and if he predicts that Shogun will implement a similar game plan against him in a few weeks, there’s a good chance that he will have devised a plan of his own to counter-act Shoguns.

Both of these fighters are extremely experienced and masters in their respected styles. Shogun is one of the best Muay Thai fighters in the sport today and Machida brings his unique Karate style into the mix. Both of these guys are black belts in Brazilian Jiu Jitsu as well so they may negate each others abilities on the ground. This can really go either way (as we saw in their first fight) and the only certainly in this upcoming fight is that the betting odds will be fairly even.