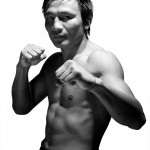 Just stumbled across this and figured it was too good NOT to post. The commentary is admittedly annoying though. Lerdsila Chumpairtour was a teammate of Saenchai’s at Jockey Gym and they have a similar illusive fighting style. October 22nd marked Lerdila’s birthday and he celebrated it with a huge knockout victory over China’s “Li Ning” in Las Vegas, Nevada.

Lerdsila isn’t very well known but it’s actually one of my favorite Muay Thai fighters. I was lucky enough to meet him while I was training at Jockey Gym earlier this year and he seemed like a really nice guy. His nickname is “Mr. Lightening” due to his agility and quickness and if you need any more explanation as to how he earned such a nickname, just hit play below..