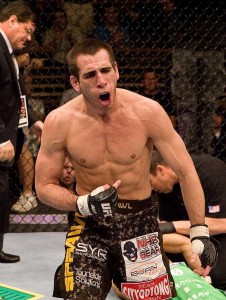 The showdown will be the co-main event on the UFC 87 card on August 9th in Minneapolis, Minnesota. Both fighters are hungry for a title shot and will surely leave it all in the ring as it’s already been pre-determined that the winner will get the opportunity to face B.J for the belt. Some victory prize, you get to fight the seemingly unstoppable B.J Penn who’s been demolishing his recent opponents and licking the blood off his 4oz gloves during his post-fight celebration.

This match-up has “fight of the night” written all over it. Both fighters are extremely well rounded and exciting to watch. Kenny Florian is coming off an impressive victory over Joe Lauzon – who many thought would be a legit threat to Florian. I remember watching that fight with a couple friends (1 of which is new to MMA) and he dubbed it a “nerd fight” based on their looks. If he only knew ..

Anyway, Huerta is coming off an impressive win himself in one of the most exciting fights of 2007. Him and Clay Guida almost went the distance in a fight where the third round looked just a fast paced as the first. That’s the fight where Huerta really got a chance to prove himself as Guida was his first taste of legit competition in the UFC. The majority of Huerta’s recent competition has been fighters making their UFC debut – not what you’d expect from a guy who has now made 6 UFC appearances.

Regardless of who’s faced tougher competition throughout their careers, both fighters have great skill sets. Florian trains under Mark Delagratte at the Sityodtong Muay Thai school in Boston – which is a branch of the acclaimed Sityodtong gym in Pattaya, Thailand. His Muay Thai is razor sharp and we’ve all seen what he can do with his elbow strikes. Florian also has a black belt in Brazilian Jiu Jitsu so he’s very competent if the fight hits the ground. If fact, he may be the one looking to take it there!

Huerta is a cardio machine and is well versed in every aspect of the game. He can strike, he can wrestle and he has a solid Jiu Jitsu game. Is his Jiu Jitsu up to Florian’s level? I don’t believe so. However, Huerta has the edge when it comes to wrestling ability so he may be able to stuff Florians takedown attempts and keep the fight on the feet.

It should be interesting to see how this match-up plays out. Will it be the fight of the night? Or fight of the year perhaps? It certainly has the potential to be. The outcome of this fight is too unpredictable but one thing is for sure – you don’t want to miss it!