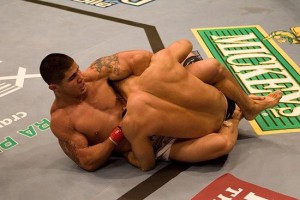 This is yet another tough one for the odds-makers. Kenny Florian vs. Joe Stevenson – who’s the underdog in this fight? Both combatants have risen to stardom following their appearances on the Ultimate Fighter reality series. Both combatants also have very well rounded fighting styles as they’ve both been quite successful in the UFC’s talent-rich lightweight division.

Kenny Florian has been making a run at the title for quite some time now. I was almost certain that following his victory over Roger Huerta, we’d be seeing a Kenny Florian vs. BJ Penn showdown headlining one of the upcoming cards. However, with BJ Penn contracted to fight Georges St. Pierre in February, it looks as though Kenny Florian has to patiently wait for his well deserved shot at BJ’s gold.

Kenny Florian – being the patient, intelligent guy that he is – has stated that he’s more than willing to fight some of the other top contenders while he’s waiting. How’s that for confidence? Kenny Florian knows that a loss will derail his title quest but rather than selecting an easy fight, he accepts perhaps the toughest match-up presented by Joe Silva – the UFC’s matchmaker.

As his 29-8 record indicates, Joe Stevenson is no pushover. Likely still in redemption mode following a disheartening loss to BJ Penn, Joe Stevenson will be looking to rack up his second consecutive win since UFC 80. It’s been said that a fighters worth is best judged not through victory, but rather – how a fighter responds to defeat.

At only 26 years of age, Joe Stevenson is constantly learning and evolving as a fighter. If anything, perhaps his loss to BJ Penn was the humbling experience that Joe Stevenson needed. His first response to that defeat was a good one as he choked out Gleison Tibau with his favourite technique – the guillotine choke – halfway through the second round at UFC 86.

Kenny Florian vs. Joe Stevenson – How does this fight go down?

Let’s work from the ground up, shall we? Joe Stevenson is no slouch on the mat as he’s spent most of his career training under Marc Laimon at his “Cobra Kai” gym in Las Vegas, Nevada. Marc Laimon is a black belt in Brazilian Jiu Jitsu and has trained numerous champion grapplers. Joe Stevenson has also spent some time training at Extreme Couture under the tutelage of Robert Drysdale – who is yet another BJJ black belt and grappling champion. Joe Stevenson – having started BJJ when he was only 13 – undoubtedly has a high belt ranking although I don’t believe he’s achieved the level of black as of yet (he was a brown belt last time I checked). However, to compliment his Brazilian Jiu Jitsu is a strong wrestling background.

Kenny Florian has a higher level of Jiu Jitsu than Joe Stevenson as he’s a legit black belt. Adding to that is his high level of Muay Thai striking as he trains under Mark Delagrotte at the Sityodtong satellite school in Boston, Mass. Kenny Florian undoubtedly has the better ground game and when considering his Muay Thai skill set which includes arguably the most lethal elbow strikes in the entire division (if not the entire organization) he certainly has the edge in the striking department as well.

That being said, while Kenny Florian is both a better striker and better grappler than Joe Stevenson, Joe Stevenson is physically stronger and with his wrestling background, that may pose a problem for Kenny. If you look back to the Kenny Florian vs. Sean Sherk showdown, Kenny Florian had a hard time neutralizing Sherk’s strength advantage. We could possibly see the same thing happen on November 15th. This is one of those fights that’s tough to predict (as are a lot of the latest fights) so you’re best bet (literally) is to select it based on the odds. The latest odds in the Kenny Florian vs. Joe Stevenson fight can be found here.