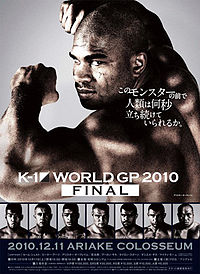 K-1 just put out some video promos for the 2010 World Grand Prix final and they’re just to funny NOT to post. It’s really not what you would be expecting, but then again, the Japanese are all about randomness and you gotta love them for that. The next round of the tournament (the quarter finals) will take place on Dec 11th so these videos will give you an inside look at the fighter preperation.

Semmy Schilt likes to scream by himself and spar with lightweights, Daniel Ghita is seen doing some “boxercise” in the free weight area of a bodybuilding gym, Tyrone Sprong is working on his elbow kicks as indicated by the way his trainer is holding the pads (straight down as opposed to against his body) and Gokhan Saki opted to just showcase his hot wife instead of his training. So, as you can see, it’s all pretty standard stuff. Oh, and Alistair Overeem is lifting a bunch of heavy, awkward weights. His video is actually somewhat impressive, but at the end of the video, when he says “alright, we’re done”, you can hear a confused on-looker saying “that’s it?”.. Anyway check them out..