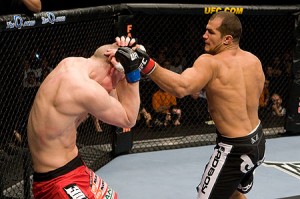 UFC 108 is stacked with knockout artists and this fight is no exception. Junior Dos Santos has been on a tear since he entered the UFC and shocked the world – well, he shocked the hardcore MMA enthusiasts who actually know about Fabricio Werdum’s background – when he knocked the former PRIDE star out cold in the very first round back at UFC 90.

During the broadcast (prior to the fight), they showed Dos Santos warming up on the pads in the locker room and although I had never heard of him, I was amazed at his hand speed. The dude was fast, and from what I could tell, he had a lot of power behind those punches as well so I instantly bet my buddy – who was watching the fights with me – 20 bucks against his 40 (2:1 odds) that Dos Santos was going to take it.

Since then, I’ve been betting on Dos Santos in each of his fights and I plan to do the same in this one. Gilbert Yvel, for those who haven’t seem him fight before, is certainly the more experienced of the two. He has over 50 fights under his belt, 31 of which have ended with a knockout – but what else would you expect from a guy nicked named “the hurricane” and training out of the “Vos Gym” alongside the likes of Ernesto Hoost, Remy Bonjasky, Antoni Hardonk and Paul Daley – who’s also on the card.

However, while Yvel is the more experienced of the two and there’s no question that he’s a vicious striker, what is to be questioned is his non-existent ground game. He’s great at what he does, and that’s swinging for the fences and putting people to sleep, but once the fight hit’s the ground, I have a feeling that he may be in some trouble.

Although we have yet to see what Junior Dos Santos can do on the ground, he trains out of black house with the Nogueira brothers and Anderson Silva – all 3 of which are black belts in BJJ – and he himself has his brown belt. So, on the off chance that this fight ends up on the ground, I’d have to give the edge to Junior Dos Santos strictly based on his grappling credentials – although we haven’t seen him place that knowledge into action yet.

As for who I think will come out on top, I’m going to have to go with my cut and put my money on Jumior Dos Santos. He’s far less experienced, but he’s been impressive thus far and hopefully, he’ll be smart enough to take the fight to the ground if he’s not getting the better of the exchanges on the feet. Either way though, this fight is sure to be fireworks as both fighters are known for their aggression and knockout power.