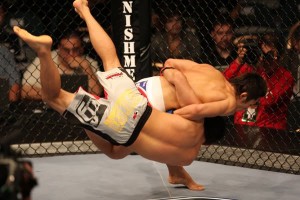 A blend between Brazilian Jiu Jitsu, Muay Thai, Wrestling and Boxing is considered to be the ideal skill set for the modern mixed martial artist. However, with the sport being relatively new, the fighters are evolving at a rapid rate and I believe that Judo and Sambo will increase in popularity over the next few years and we’ll start seeing a more throws (like the ones in the highlight below) a lot more often.

When I was at a Muay Thai gym a couple years back (I’m still currently training in Thailand now), Jon Fitch came to the gym to work on his Muay Thai following his loss to GSP and while he was there, he gave a seminar where he showed some techniques and answered questions from the students. He said that Judo was going to be the “future” and that we’re already seeing it with some of the fighters now (once again, the video below)..

I started my martial arts journey with Sambo (a choice influenced by Fedor Emelianenko) and after nearly 4 straight years of Muay Thai, I think it’s about time to get back to it. Russian Sambo is based off of Japanese Judo and a lot of the techniques are very similar (Sambo includes the addition of leg locks and some striking techniques). Anyway, check out the video below. Whoever made it did an awesome job putting the highlights together but obviously, a terrible job with the music selection..