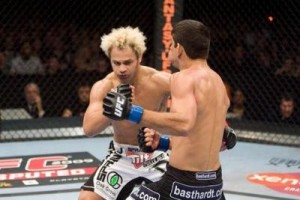 Josh Koscheck will finally get the chance to redeem himself for what I personally feel was a fluke loss to Paulo Thiago back at UFC 95. I think it was a fluke not because Paulo Thiago isn’t a good fighter, that’s clearly not the case. I mean, the guy has a black belt in both Judo and Brazilian Jiu Jitsu – both of which are extremely applicable to mixed martial arts.

I think it was a fluke because Josh Koscheck lost that fight on the feet, which is an aspect of fighting where he certainly has an advantage. Even as the fight was transpiring, Joe Rogan was praising Josh’s crisp striking while criticizing the sloppy, reckless, “chin up in the air” style striking of Paulo Thiago.

They say everyone has a “punchers chance” and I guess it was just Paulo Thiago’s lucky night that night – he should have stopped off at 7 eleven on the way home and bought some lottery tickets. But then again, he won a mini-lottery anyway because that knockout won him “knockout of the night” honors and the $65,000 dollar bonus that comes with it.

Since then, Josh Koscheck – who is now the most active fighter in the UFC stating that he would like to fight every month – has knocked off 2 very impressive victories over Frank Trigg and Anthony Johnson. Paulo Thiago has since been defeated at the hands of Jon Fitch, but let’s be honest, most people lose to Jon Fitch. However, in his next bout, Paulo Thiago shut down the previously undefeated UFC newcomer, Jacob Volkmann.

As for how these 2 guys match up stylistically, I think that Josh Koscheck has the edge. He’s a lot stronger and he’s much more explosive than Paulo Thiago. He’s one of the most accomplished wrestlers in the entire organization having gone 43-0 in his junior year at college and then going on to becoming a 4 time NCAA Division 1 All-American.

His striking has improved leaps and bounds due to his time spent training at the American Kickboxing Academy in San Jose, California. And on the slim chance that anyone will be able to outwrestle him and put him on his back, he’s been working on his Brazilian Jiu Jitsu and has now earned his brown belt.

Granted, Paulo Thiago is an accomplished Brazilian Jiu Jitsu black belt but it really seems unlikely that he’s going to be able to out-due Josh Koscheck’s superior wrestling ability and get the fight to the mat. The better wrestler always has the option to dictate where the fight will take place and in this particular instance, I feel as though Koscheck will steer the fight away from Paulo Thiago’s strength and keep the fight standing.

I doubt that lightening is going to strike twice and Koscheck – being the more technical striker – will likely show the world that his previous loss was a fluke. The betting lines for this fight will be interesting considering the outcome of their previous fight so if the odds are anywhere near even (I highly doubt they will be), then the smart money will be on Josh Koscheck.