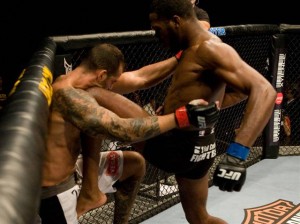 Announced to take place at the Ultimate Fighter 10 finale, this Jon Jones vs. Matt Hamill showdown should make for a great fight. Jon Jones made his debut at UFC 87 against previously undefeated Andre Gusmao while the fight wasn’t very impressive, Jon Jones did get to showcase his explosive Greco roman wrestling skills as well as his unorthodox, crowd pleasing striking techniques.

However, it wasn’t until his fight with Stephan Bonnar at UFC 94 that the world started to take notice. In that fight, he absolutely dominated the veteran and he did so in an incredible way. He whipped Bonnar all around the octagon and rocked him with flashy kicks and spinning elbows. After the fight, when asked where he learned how to strike, he joking said “you tube”.

In his last outing, it was obvious that “Bones” Jones had become a fan favourite by the reaction of the crowd when he fought Jake O’Brien. In that fight, he picked up his first “finish” in the Octagon as he submitted Jake with a Guillotine choke in the second round. Now, with a 3-0 record in the UFC and a 9-0 record in total, he’s stepping up the competition with about against Matt Hamill.

Matt Hamill – who’s coming off a devastating head kick KO victory against Mark Munoz at UFC 96 – will be looking to add to his win streak and his already impressive record inside the Octagon. His only real loss thus far has come from Rich Franklin and well, that’s understandable seeing as how Franklin is one of the best. Technically, Matt Hamill has a loss against Michael Bisping but it’s hard to consider that as an actual defeat. Watch the fight for yourself if you want to see why.

As for how these two guys match up, well ..they’re both monsters when it comes to Greco roman wrestling. Based on what I’ve seen so far, I’d give Jon Jones the edge in the striking department but Matt Hamill has shown a lot of improvement in the last couple of his fights. That being said, he got absolutely picked apart by Rich Franklin and he tends to look somewhat sloppy at times.

He’s improved a lot, he has a powerful jab, but he drops his hands way too often and that’ll most likely be a problem against a 6’4 striker with an 84.5 inch reach. Franklin utilized Thai style kicks to finish him and it just so happens that Jon Jones has been working his Muay Thai with Phil Nurse lately – who’s one of the best Thai boxing trainers in the country.

The best chance for Matt Hamill to win is to take him down, control him and pound him for either a stoppage or a decision victory. It should be interesting to see how this one plays out.