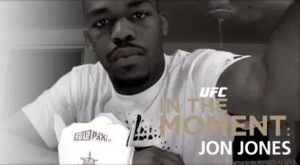 It’s been a long time since I’ve been as hyped up for a fight as I am for the Shogun vs Jon Jones fight tomorrow night. I’m a long time Shogun fan but videos like this are making it hard to route against Jon Jones. He seems like an awesome guy and there’s no doubt that she’s good for the sport of MMA. He’s well spoken, he’s respectful, he has an exciting fighting style and most importantly, after watching the video, there’s no doubt that he’s REAL. He speaks from the heart, he knows what he wants and he seems determined to get it.

I hope the UFC sticks with this “In The Moment” concept it gives us a chance to see the mental state of the fighters, their lifestyle and their training routines coming into the fights. The countdown shows are great, but I prefer this because there’s less hype and it seems more genuine. Jon Jones filming himself speaking while there’s a chinese take out package on the table next to him – it doesn’t get more “real” than that. Anyway, here’s the video..