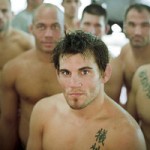 “Such Great Heights” is an upcoming documentary that follows Jon Fitch and his team mates from the American Kickboxing Academy as they train for their fights and pursue their dreams. Judging by the brief preview above, it looks like it’s going to be incredible. Here’s a more in depth description of it..

“Such Great Heights” gives an intimate look inside the world of mixed martial arts fighting. The film follows top UFC Welterweight Contender Jon Fitch, both inside and outside of the cage, as he prepares to do battle with Champion Georges St. Pierre. Intensity and emotion move toward critical mass as fight night approaches and a tight knit team rallies around Jon.

While Fitch prepares for this climactic moment in his life, the story weaves through the daily triumphs and challenges of the other fighters at the American Kickboxing Academy (AKA). The film explores the grueling lifestyles of these fighters as they deal with everything from their personal demons to finding a place to sleep at night.”

We’ll keep you updated as to when it’s released. This is definitely the sort of documentary that you would want to buy to support the producers and everyone involved. If this goes on to sell a lot of copies, then more and more of these sort of behind-the-scenes documentaries will be popping up – which is obviously a good thing.