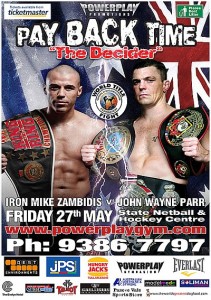 Last night, Melbourne Australia played host to the 3rd meeting between John Wayne Parr and Mike Zambidis. The event was called “The Decider” as these guys have split their meetings with 1 win each. The quality of the video is pretty low (as it was recorded by someone high up in the stands) but it’s all we have for now so it’ll have to due.

The fight opens up with Zambidis rushing across the ring in attack mode only to be teep-kicked to the ground. From there, it was all John Wayne in an epic slugfest. In traditional Muay Thai fights, the action doesn’t even pick up until the 3rd and 4th rounds but that’s the Thai style of doing it. Zambidis on the other hand has always been an aggresive fighter and this outing was no different.

Having trained alongside John Wayne Parr at the 13 coins gym in Bangkok, Thailand, what was most impressive to me was his work ethic and overall intensity during his workouts. He never misses a training session and he’s never just “going through the motions”. Everything he does in the gym, every round, every punch or kick – it’s all done at 100% power.

Based on this fight, the type of training that John Wayne puts himself through definitely paid off because most “normal” people would not have been able to keep up the fast pace and fluries of punches that were required to finish this fight in the first round. Anyway, here’s the video..