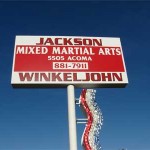 Earlier today I posted up a video clip entitled “the man of mystery” featuring Carlos Condit. A couple weeks before that, I threw up a similar clip featuring Clay Guida before his fight with Anthony Pettis. Well, I just realized that they’re both part of an ongoing series entitled “the gym” that gives us an inside look into the Jackson and Winkeljohn MMA camp in New Mexico.

I spent the last hour or so watching all of the episodes and judging by the view count, these aren’t getting the attention they deserve – which is why I decided to post all of the videos from the first season. The first few episodes gives us an inside look into the training and personal life of Brian Stann (who seems like a really cool guy) and from there, they shift to focusing on other fighters from the camp (Clay Guida etc). Enjoy..