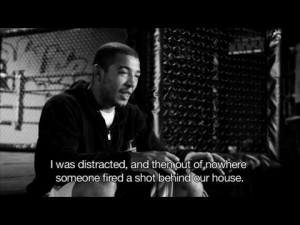 The “Fight Life” series by Fight! Magazine – which in my opinion, is the best MMA magazine on the market – was made to give fans somewhat of a behind-the-scenes look into the lives of their favourite fighters. The 2 videos above feature current WEC champion Jose Aldo, and in them, he’s discussing his past and how he got to where he is today.

In the first video, which is called “the beautiful game”, he talks about how he was an aspiring soccer player and when his coach noticed his violence on the soccer field, he suggested that Aldo take up fighting as a sport instead. He also discusses growing up poor as a child and living iat the dojo until a friend took him in. He then goes on to speak about a time where he was watching TV with his friends and he heard a gunshot from outside that scared him to the point where he leapt off the sofa and dove on the floor.

In the second video, he discusses his wife, Vivianne, who he met at the gym as she was training Muay Thai at the time as well. After they started dating, Vivianne found out what he was living in the Rio Favelas and she invited him to live with her and her parents in a better neighbourhood. In order for her father to approve him moving in, he insisted that they get marred .. and so they did. Hit play and watch for yourself.