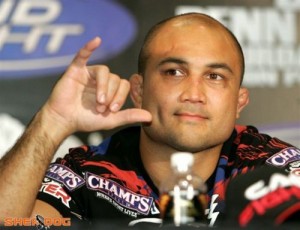 BJ Penn is known to be a pretty outspoken guy. A lot of the time, some would say he’s “trolling” but sometimes, he actually has some logical ideas. However, I’m not quite sure what category the comments in the following video would fall into. In a recent interview, BJ Penn was asked about how he would make the fights more exciting for the fans and his response, well, I’m not sure if it’s brilliant or horrible.

His proposal is to remove both the judges and the belts. The highest paid (and highest ranked) fighters will be the guys with the best records and the most finishes. And the end of a fight, rather than have the judges pick a winner, the fight will automatically be ruled a “draw”. In other words, the “lay and pray” strategy would no longer be an effective way to rise to the top and in order to get the big paydays, fighters would have to alter their style, be more aggressive and go for either a knockout or a submission in order to be victorious.

I have no doubt that his suggestions would make the fights more exciting. The idea itself is actually pretty good. However, with mixed martial arts gaining momentum to legitimacy and mainstream acceptance, BJ’s rule change ideas would likely defeat the “pro MMA” arguement that the sport is safer than boxing, football, hockey etc. when the only way to win is to “finish” an opponent. Anyway, check out the video for yourself..