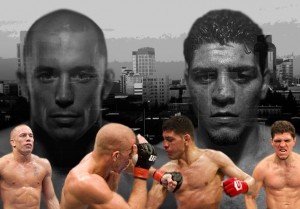 After a couple weeks of speculation, Dana White has now officially announced that a “superfight” between champions GSP and Nick Diaz will indeed happen. The fight is booked to take place in Las Vegas on October 29th and it will be the main event on the UFC 137 card.

Betting lines for the fight have already been released and the initial odds for the fight have GSP as over a 3-1 favourite to win. Meaning; if you bet 100 dollars on Diaz, you’ll get a $365 payout if he wins. Alternatively, you’ll need to risk $365 on GSP to walk away with $100. I’m pretty confident that GSP will be victorious (once again), but given the win streak and improvements that Nick Diaz has made, he doesn’t seem like a bad choice at all considering the current betting line.

With Nick Diaz being a “Strikeforce” fighter, there were a few issues to “iron out” in order to make this “superfight” happen. Diaz has just signed an 8 fight contract with the UFC, but contractually, he’s still able to fight in Strikeforce. In other words, Diaz is the first fighter since the Zuffa/Strikeforce buyout to sign a contract enabling him to fight under both promotions. However, if Diaz is able to pull off the upset, it’s highly unlikely that he’ll return to Strikeforce at all.

That brings up another issue; GSP will be defending his title but obviously, with the fight happening in the UFC, the Strikeforce title won’t be on the line. Essentially, it’s possible for Diaz to become the welterweight champion in BOTH organizations if he’s able to pull out a victory. Having a fighter become a champion in both organizations simultaniously is something that I figured would happen but I thought Alistair Overeem would be the man to do it. It looks like Nick Diaz will have the first crack at it.

With the news of the fight being so new, there’s not many good hype videos online yet so instead, here are my favourite Nick Diaz and GSP highlights..