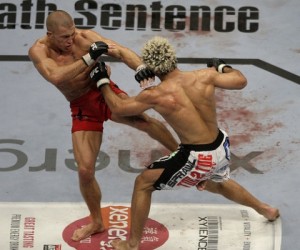 It was just announced today that the next time the UFC comes to Montreal, GSP will get to defend his title in front of his hometown crowd. On December 11th, it’ll be Georges St. Pierre vs. Josh Koscheck once again. Since their last meeting back at UFC 74, Koscheck has gone 6-2 while St. Pierre hasn’t lost at all in route to a 7 fight win streak.

Both of these guys show a huge improvement every time they fight. While their fighting styles are similar today, they were the complete opposite of each other when they first got into the sport. Koscheck came from an extensive wrestling background while St. Pierre didn’t wrestle at all throughout high school or college.

St. Pierre came from a Karate and Muay Thai background so his main strength was his striking. Today though – despite having not wrestled throughout his early years – he’s considered by many to be the best wrestler in the sport.

Koscheck, as mentioned, is just the opposite. While entering the sport as a pure wrestler, he’s now feared for his knockout power and it seems as though he likes to use his wrestling ability for takedown defence and keep his fights on the feet – his last fight against Daley is an obvious exception.

In their first fight, St. Pierre shocked the world and actually beat Koscheck at his own game – wrestling. He took Koscheck down at will and when Koscheck shot on GSP, his attempts were stuffed with ease. GSP really made a statement that night since Koscheck was widely considered to be one of the best wrestlers in the division, if not the entire organization.

So the big question is; how will the rematch differ from their first fight? Their first fight was extremely decisive. I don’t even think that GSP lost a single a round (GSP losing rounds is pretty uncommon these days). Both of these guys have improved a great deal since their last fight but it seems as though they’ve both been improving at an equally impressive pace.

The key to victory for Koscheck would be to keep it on the feet and hope to land that crushing right hand of his. Matt Serra was able to land a shot and put GSP out so Koscheck certainly stands a chance at doing so as well. In terms of grappling, I really don’t see GSP losing in that realm of the fight. He didn’t lose in their first meeting and judging by who far his wrestling has come, I don’t see him being manhandled in this fight, or any of his upcoming fights for that matter.

GSP, being the intelligent fighter that he is, will likely take the fight to the ground as soon as he can in an attempt to minimize the risk involved with engaging in a slug fest with Koscheck. If he’s able to carry that out, then it’s hard to see Koscheck winning this one. However, this is MMA and with 4 oz gloves, anything can happen.

Koscheck has started the trash talk early for this one. At UFC 113, following his victory over Paul Daley, he told the fans on Montreal that the “Habs” were going to lose in the playoffs and then he was going to beat GSP. He later said at the post fight press conference that he wasn’t going to be going to his after party out of fear that an angry mob might show up. These two guys have also been selected to be the coaches of the “Ultimate Fighter” season 12, which is set to air soon. The hype videos for this fight are already popping up. Here’s a good one..