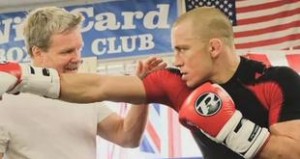 Nick Diaz has showcased some legit, yet unorthodox boxing skills in his latest fights and before he was offered this title shot against GSP, he was considering a switch from MMA to the world of professional boxing in hopes of getting bigger paydays. There’s no way that St. Pierre is going to take the threat of Nick’s boxing lightly and judging by the following video, he’s doing exactly what he needs to be doing to prepare for it.

GSP has currently stationed himself in Hollywood, California, to train at the Wild Card gym under the tutelage of Freddie Roach. GSP has been working with Roach on and off for the past couple years and in his fight with Josh Koscheck back at UFC 124, he showcased a level of boxing precision that was yet to be seen inside the Octagon.

In the short video below, we get an inside look into the Wild Card gym where Freddie Roach is working GSP on the mitts and offering up some of the same advice that has created so many world champions. This GSP vs Nick Diaz fight has been confirmed for the UFC 137 event on October 29th.