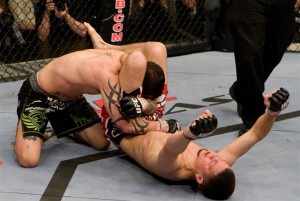 On January 11th, we’ll get to see a rematch between Grey Maynard and Nate Diaz for free on Spike TV. Recall that these two have squared off once before in the semi-finals of the Ultimate Fighter Season 5 reality show. In that particular fight, Nate Diaz was victorious as he used his superior Brazilian Jiu Jitsu skills to submit “the bully” with a guillotine choke in the second round.

Since then however, Grey Maynard has been on a tear and he’s yet to be defeated in his professional MMA career. Maynard, who wrestled alongside Rashad Evans at Michigan State University, has been using his amateur wrestling background to literally “bully” his opponents around the Octagon. As a matter of fact, he is perhaps the most accomplished wrestler in the UFC’s lightweight division at the moment.

If Grey Maynard is able to get past Nate Diaz, the victory will put him in contention for a shot at BJ Penn’s lightweight title. Although I don’t believe that any lightweight in the UFC at the moment has what it takes to dethrone the seemingly unstoppable BJ Penn, Grey Maynard, if anyone, poses the greatest threat.

He’s big, strong, aggressive and he has a legit wrestling background. GSP revealed the key to beating BJ Penn in their last fight and if there’s anyone in the lightweight division that can duplicate that strategy, it’s Grey Maynard. BJ Penn and Grey Maynard also used to train together so I imagine he’ll be able to put together a great game plan.

That being said, in order to get that title shot, Grey Maynard has to first get past Nate Diaz – which is no easy task. Like his brother Nick, Nate is often overlooked and underestimated and because of that, he oftentimes shocks the world with his performances. He’s cocky, but for good reason, and he can certainly back up all the trash talking he does.

Having beat Grey Maynard before, he’ll certainly be entering this fight with the mental edge. And having been submitted via guillotine choke, Grey Maynard will have to be extra cautious when he shoots in for those takedowns.

In terms of how these guys match up, it’s fairly even. Grey Maynard is obviously the more powerful of the two and he’s the better wrestler but Nate Diaz – being a brown belt in Brazilian Jiu Jitsu under Cesar Gracie – is excellent at fighting off his back. He always stays active and always threatens from the bottom and if an opening presents itself, he’s quick to slap on that triangle choke – as Kurt Pellegrino experienced first hand when Nate Diaz submitted him and won “submission of the night” honors at his expense.

This is one of those fights that could go either way and it’s got “fight of the night” written all over it. But that’s not a very bold prediction considering that Nate Diaz has won either “fight of the night” or “submission of then night” honours in his last 5 fights. Job security in the UFC is terrible but with the performances that Diaz is putting on, regardless of whether he wins or loses, his job is pretty safe.