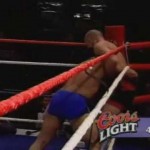 It’s always interesting to have a look at a fighters past fights to see how they’ve developed their skill sets. As mentioned over and over during the UFC broadcasts, Georges St. Pierre is one of those constantly improving fighters who looks like a more developed version each time we see him. He’s widely considered to be the best wrestler in MMA and what makes that so impressive is that he never wrestled in high school or college.

The fight that’s posted below was filmed back in 2002 and it was GSP’s first professional fight. It ends with some controversy but the main difference that you’ll see between the GSP of 2002 and the GSP of 2010 is his wrestling ability. In 2002, he was struggling in the scrambles against Ivan Menjivar and today, he’s out wrestling guys like Josh Koscheck and Matt Hughes. Not to knock Ivan though, he was 4-0 going into that fight and throughout his career, he’s fought guys like Matt Serra, Caol Uno, Joe Lauzon and Jeff Curran. Anyway, check out the fight.