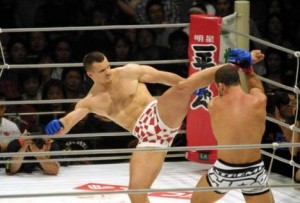 The headliner for UFC 119 was a rematch between Frank Mir and Nogueira but a couple days ago, word was released that Nogueira would be pulling out of the fight due to a chronic hip injury. Without wasting any time at all, the UFC announced that fellow PRIDE vet Mirko “Cro Cop” would be stepping in to take his place.

Cro Cop, being one of the best strikers in mixed martial arts, is the polar opposite of Nogueira in terms of fighting style. Nogueira, of course, is one of the best grapplers in the sport so it’s highly likely that Mir was planning to keep the fight standing in order to replicate what happened in their first fight. Now, he’ll have to go back to the drawing board and establish a completely new game plan since I highly doubt that he’ll be looking to exchange blows with a K1 level striker.

Luckily for Mir, he’s fought and beat high calibre strikers before. Anthony Hardonk and Cheick Kongo are both great kick boxers but they both ended up getting submitted. Mir, being an accomplished black belt in Brazilian Jiu Jitsu, will likely be able to control and submit Cro Cop if he’s able to get the fight to the ground. However, getting Cro Cop down isn’t an easy task.

In his entire career, he’s only been submitted once (by Nogueira) and he’s known for his takedown defence. Mir on the other hand, isn’t known for his strong wrestling base despite racking up a 44-1 record during his senior year in high school.  A lot of his submission victories have come while fighting off his back (Lesnar, Sylvia) and considering Mirko’s fighting style, I doubt he’s looking to fight from within Frank’s guard if he can avoid it.

If this becomes a stand up war, then Cro Cop should have a distinct advantage. Mir striking skills have looked awesome lately. I‘m guessing that Mark DellaGrotte, a sought after Muay Thai coach who runs the Sityodtong gym in Boston, has something to do with Mir’s recent improvements. However, it seems unlikely that he’ll be able to out-strike a guy like Cro Cop.

Both of these guys are in desperate need of a win at the moment as they’re both likely to jump back into title contention. Mir wants his revenge on Lesnar and Cro Cop has stated that he has the UFC gold in his sights. Both of these guys also have a distinct advantage over one another in certain aspects of the fight game (Cro Cop with his striking and Mir with his grappling). It’ll just come down to who wants it more at this stage of their career and of course, who can implement their game plan more effectively.