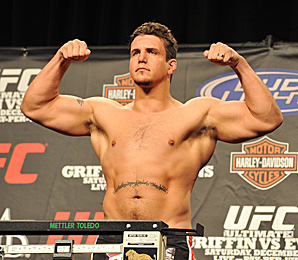 In about two and a half weeks, we’re going to witness a couple of the UFC’s largest and most talented heavyweights clash in a match up that will determine the top contender in the division. The winner will of course get a shot at Brock Lesnar at the start of the summer (they’re saying July at the moment).

For years, the heavyweight division in the UFC was laughable. So laughable in fact, that Randy Couture came out of his initial retirement and dominated both Gabriel Gonzaga and then Tim Sylvia to become the champion and in turn, he had himself and millions of fans worldwide convinced that he was “the one” that was going to beat Fedor Emelianenko.

Well, that fight never transpired but it’s a pretty safe bet (judging by both Randy’s and Fedor’s recent performances) that Fedor would have been too much for him and Randy’s quick rise to the top was partly due to the lack of depth in the heavyweight division.

Today, things have certainly changed. Brock Lesnar reigns supreme and there’s a stable worthy challengers that are capable of beating him on any given night. Cain Velasquez, Shane Carwin, Junior Dos Santos and Frank Mir ALL possess skill sets that will enable them to get the job done.

The fight between Frank Mir and Shane Carwin is an interesting match up for a number of reasons. Since Shane Carwin is very similar to Brock Lesnar in the sense that he’s a big, strong and accomplished wrestler, I’m excited to see if the “new”, puffed-up and “improved” Frank Mir will be able to match the physical strength of Carwin and avoid the take down.

If Frank Mir – who doesn’t have much of an amateur wrestling background – can somehow use his newfound strength to neutralize Carwin’s takedown attempts and keep the fight on the feet, then it may give us an insight as to how he will be able to fare against Lesnar in a rematch.

However, in order to get that rematch with Lesnar that he’s been obsessing about, Frank Mir will have to get past Shane Carwin, and based on what we’ve seen thus far, “getting past” Shane Carwin is no easy task – especially considering that he’s currently undefeated and none of his opponents have made it out of the first round with him.

Since Carwin has blown through his opponents so quickly, there’s a lot that we don’t know about him. For instance, how is his cardio? In his last fight against Gabriel Gonzaga, we demonstrated that he has a good chin and that he can take a hard shot and keep going. In addition to being able to take it, he can certainly dish it out too as he has devastating power in his hands.

Being an accomplished wrestler, his “top game” is solid as well, but we still haven’t seem him fight off his back yet and we don’t know what sort of submission defence he has yet either. Frank Mir is an incredible submission specialist as well.

Any way you like at it, this Frank Mir vs. Shane Carwin fight is quite interesting and regardless of who wins, the UFC hype machine will have a lot to work with when it comes time to promote a fight between the winner of this and Brock Lesnar.

If Frank Mir wins, the rematch between him and Lesnar will have the potential to be one of the most watched fights ever. They genuinely hate each other, the “series” between them is tied 1-1 and Frank Mir has made a lot of powerful statements regarding his dislike for Lesnar and how beating him up is all he thinks about. Plus, he’s packed on about 25 pounds of solid muscle in an attempt to avoid being bullied around again.

If Shane Carwin pulls out the victory, that makes for a very hype-able title fight between him and Lesnar as well. Shane has already voiced his displeasure regarding how Lesnar conducted himself after UFC 100 and basically how he’d like to treat him a lesson (not in those words). Both guys are absolute giants and very accomplished wrestlers. It’ll be interesting to see how they stack up.