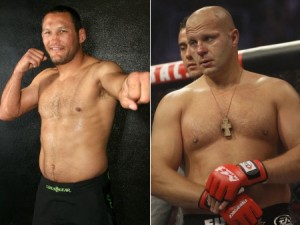 For the last month or so, there’s been a rumour circulating that Fedor Emelianenko would be facing Dan Henderson in his next fight. Well, the contracts have been signed and it’s official; the two MMA legends will square off on July 30th at the Sears Center Arena in Hoffman Estates, Ill. Tickets for the event will be going on sale to the public this Saturday (June 4th) and will range from $35 to $350.

Considering the size of the arena and the modest ticket prices, it’s surprising that the combined payout for Fedor and Henderson ALONE is about 2.3 million dollars (1.5 million for Fedor and 800k for Henderson). What’s even more surprising is the fact that these two are still getting payouts like that even though Zuffa bought out Strikeforce a few months ago.

As for the fight itself, I think it’s a solid match up but I don’t really see what Fedor gains from it. Sure, he’ll have a size advantage which will be a nice change of pace but if he wins, the skeptics will try to discredit the victory by claiming that Henderson is just a “middleweight” dispite being a multi-organization champion and a legend of the sport.

Being a huge Fedor fan (I’m a Henderson fan as well), I don’t believe that he was ever “overrated” and he did NOT get “exposed” as some would say. Against Werdum, he got caught. It happens (though for some reason people forget that Fedor is human like everyone else). Fedor made a mistake and I’m sure he’s learnt from it. It’s not like Werdum is some BJJ scrub either. He’s a 2x WORLD CHAMPION and aside from Roger Gracie, he’s the best heavyweight BJJ practitioner who’s competing in mixed martial arts.

In his most recent fight, he was defeated by Antonio Silva. Antonio Silva is the real deal. You have the critics that will make the claim that he hasn’t fought “top competition” but anyone who actually trains in martial arts can tell by watching him that he’s a huge threat in the division. His Muay Thai is sharp, he’s extremely powerful and he’s a high level BJJ black belt. Add to that the fact that he fights at around 290lbs and he’s a threat to anyone.

The first round in the Fedor vs Silva fight was pretty even. I believe that Fedor was ahead on the scorecards. In the second, Fedor ended up getting taken down and pounded for the remainder of the round. He didn’t quit, he never tapped, never gave up; as a matter of fact, he managed to get out and threaten “Bigfoot” with a leglock towards the end of the round. Between rounds, the doctors called it off. Not Fedor and not any of his cornermen.

Being mounted by someone like Silva – who has world class BJJ and who had a 60 pound weight advantage come fight night – would be a terrible situation for anyone. I believe that Fedor still has some great fights left and even if he loses against Henderson (and goes on to lose his next 5 fights), he’ll still be a legend in the sport for what he’s accomplished regardless of what the “haters” say.

If Henderson is able to pull off a victory, I would like to see the UFC offer him a rematch with Silva or a shot at Jones (or whoever the current title holders are at the time) because at the moment, Henderson has pretty much every championship belt mounted on his wall with the exception of a world title from the UFC (though he HAS won a title back when the UFC was using a tournament format).

Of all the fights that have currently been announced, I’m more stoked for this than any of the others. Now that things are official, the pre-fight hype has already started and posted below you’ll find an awesome fan made preview of the fight (the official trailers haven’t been released yet). Check it out..