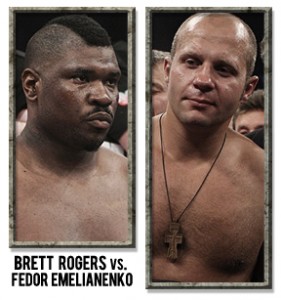 I’ll say this straight up right now, Fedor Emelianenko is my favourite fighter and he has been for years. I’ll never pick a fighter to beat him but since I’m such a fan, when an opponent is a legitimate threat, I actually get nervous. I’ve always thought that Josh Barnett could potentially pull off the upset and I was pretty concerned about that fight. I still think that Fedor would come out victorious (as he always does), but if there’s anyone out there right now with the tools to beat Fedor, it’s Josh Barnett.

Unfortunately – or fortunately, however you want to look at it – that fight didn’t end up happening. Barnett got busted for steroid use (again), and that eventually lead to the downfall of Affliction as an MMA promotion. They scrambled to get a late replacement for Fedor and one of the options was Brett Rogers, but apparently Rogers wanted 800,000 for the fight. They then offered the fight to Vitor Belfort, who accepted, but due to a lack of interest, that idea was tossed away.

Looking back on it, and considering the dominating performance that Vitor Belfort put on against Rich Franklin, a Vitor Belfort vs. Fedor Emelianenko might have been more entertaining – and perhaps more competitive – than people expected. Well, it didn’t happen but at least now we’re getting the fight against Brett Rogers.

Rogers – who’s also undefeated (I don’t consider Fedor’s “loss” to be a defeat) – is coming off an impressive KO victory against Andrei Arlovski. Knocking out Arlovski in their last fights is a shared similarity between Rogers and Emelianenko. When he dropped Arlovski, Brett Rogers catapulted himself into the top 10 heavyweight rankings and with that, he’s getting the shot of a lifetime against Fedor.

Aside from Arlovski, Brett Rogers hasn’t fought any serious contenders. Now that’s not discrediting his ability as a fighter. Rogers has disposed of every challenger that he’s faced off against. As a matter of fact, he’s a perfect 10 for 10. That’s 10 fights, 10 wins and 10 finishes. He’s been on a tear and knocking everyone out.

However, there’s still so many question marks. He can strike, sure – we’ve seen that. But can he wrestle? How is his BJJ? Can he fight off his back? Can he defend submissions? He’s never been past the second round so how’s his cardio and most importantly, how’s his heart? He hasn’t really been into the deep waters and tested yet so it’s all a mystery at the moment.

Then there’s Fedor. He’s on a 30 fight win streak and despite what Dana White says, he’s knocked off some incredible, legit competitors along the way. He’s proven. He has the heart, he has the skill set – he can really do it all. He can out strike the best strikers (Crocop, Arlovski, Schilt) , out wrestle the best wrestlers (Lindland, Randleman, Coleman) and out grapple the best BJJ guys (Nogueira).

As a matter of fact, I don’t think Fedor has even lost a round since he fought Arona in the Rings promotion almost a decade ago. And even then, striking to the face wasn’t allowed so Fedor wasn’t able to utilize his devastating ground and pound tactics that he’s known for.

Fedor will be the heavy favorite in this fight. However, the mystery surrounding the abilities of Brett Rogers is what makes this fight so interesting. He could be 10-0 right now on his way to a 50-0 career. We just don’t know. He has the KO power to pull off an upset. But whether he can land that shot before he gets clinched up and taken to the ground is a different story. This will be a good one!