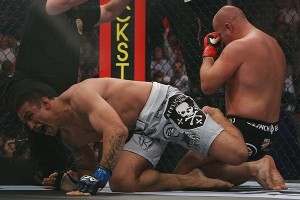 Back in June, Fedor Emelianenko found himself in somewhat of a lose/lose situation. He was fighting Fabricio Werdum – who’s a multiple time World Brazilian Jiu Jitsu champion, but who was also a huge underdog going into the fight. Most people were overlooking Werdum and viewed him as only a minor hurdle in route to the Fedor vs. Overeem super fight that they were thirsting for.

Facing a dangerous underdog isn’t a new thing to Fedor. Throughout his career, he’s knocked off multiple world champions and yet, in the words of the haters, “he hasn’t fought anyone”. The Fedor debates always piss me off. How any educated fan of the sport dismiss his opponents as being “cans” is beyond me.

New fans to the sport will look over his record and since the majority of the guys he’s defeated are washed up TODAY, they’ll try to discredit his accomplishments despite the fact that they were in their prime when Fedor beat them. Heath Herring for example. Today, the victory doesn’t look very impressive but back in 2002 (when the fight occurred), Herring was a heavy favourite and one of the top dogs in the PRIDE organization.

It’s the same story with Randleman and Coleman (both former UFC heavyweight champions), Sylvia and Arlovski (also former UFC champs), Matt Lindland (who was the number 1 ranked middleweight at the time), Brett Rogers (also ranked in the top 10 when they fought) then a slew of k1 level kick boxers such as Mirko Cro Cop and Semmy Schilt (who’s the current K1 champion).

Of course, let’s not forget about his dominant victories over a prime Nogueira, who later went on to capture the UFC heavyweight title. Werdum, though overlooked by most, was an extremely dangerous opponent and while Dana White will say that “Fedor got beat by a guy who couldn’t hack it in the UFC”, the fact is that Werdum went 2-1 in his UFC career with victories over Brandon Vera and Gabriel Gonzaga. His only loss in the UFC was to Junior Dos Santos, who has dominated everyone that the UFC has put in front of him.

As mentioned above, Werdum also happens to be one of the best Brazilian Jiu Jitsu fighters in the world so the fact that he was able to catch Fedor in a triangle/arm bar combination shouldn’t be that discrediting. It happens. One submission loss, at the hands of one of the best submission grapplers in the world and all of a sudden Fedor is “finished” and “exposed”? Give me a fucking break.

That was his first official loss in over a decade of competition and immediately following the defeat, a lot of sites completely wiped him off their “pound for pound” rankings. It doesn’t make sense to me, especially when Rashad Evans (got decimated by Machida) and BJ Penn (even following his loss to Edgar) remained on most of the lists.

So where does Fedor go from here and what potential match ups does the Strikeforce organization have for him? I believe that a rematch with Werdum or a fight with Overeem are the only two potential match ups that will restore Fedor’s credibility. Antonio Silva is waiting for whoever steps up but that’s an extremely dangerous fight that will do nothing to restore Fedor’s image.

That’s not to knock Antonio Silva either. It’s more of a compliment to him than anything. He’s huge, he’s incredibly strong, he has crisp, technical striking and he’s a Brazilian Jiu Jitsu black belt. He’s a complete fighter and in my opinion, I think he has what it takes to beat a guy like Brock Lesnar. However, since his skill set surpasses his current credibility, if Fedor were to beat him (which wouldn‘t be an easy task for anyone), people would immediately discredit the victory (much like they would have done had he ended up beating Werdum).

Strikeforce has a few other decent fighters on their roster but only victory over Werdum or Overeem will restore Fedor’s “perceived” credibility. His loss to Werdum hasn’t changed my opinion of him, but then again, I’m not a brainwashed UFC fan boy.