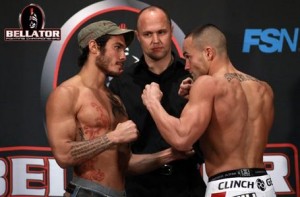 Last night, at the Bellator 33 event, there was a non-title fight that featured the champion, Eddie Alvarez, against the “bully bashing” Roger Huerta. I actually figured this would be a close fight and a stand up WAR since both of these guys are great strikers. Roger Huerta even spent some time in Thailand training at Tiger Muay Thai and even before that, he’s always looked pretty crisp in the stand up department. Well, this just goes to show how good Eddie Alvarez is since he picked apart Huerta with ease.

Alvarez mixed things up perfectly with jabs, hooks, uppercuts, leg kicks and of course, he did so in a way (with angles and in-and-out attacks) that he didn’t take much damage from Huerta at all. After 2 rounds of near perfection, Alvarez ended up finishing the fight with a leg kick that buckled Huerta’s knee (prompting a doctor stoppage). Now, out of 21 victories, Eddie Alvarez has only been to a decision ONCE.