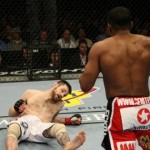 This clash between Dustin Hazelett and Paul Daley is a classic pure striker vs. pure grappler showdown. Set to take place at UFC 108 in Las Vegas Nevada, this fight is sure to end with either a devastating knockout or an incredible submission. After all, Dustin Hazelett’s last 4 wins in the octagon have come by way of submission and the last 2 have won him the “submission of the night” bonus.

On the other end of the spectrum, Paul Daley’s last 11 victories have come via strikes. Paul Daley doesn’t go to decision very often and although he’s relatively unknown to the American audience, he’s been bouncing around from organization to organization and knocking dudes out left and right.

Paul Daley splits his time between Team Roughhouse (where he trains alongside welterweight standout, Dan Hardy) and Vos Gym, where he trains with some of the best heavyweight Muay Thai practitioners in the world. His training partner Gilbert Yvel also happens to be fighting on the same card so they’ll be looking to head back to Amsterdam with a pair of victories under their belt.

However, in order to get that victory, Paul Daley is going to have to fight off Dustin Hazelett’s takedown attempts. Dustin Hazelett was recently awarded his black belt in Brazilian Jiu Jitsu from Jorge Gurgel so it’s no secret what his game plan in this fight will be; takedown, control and then submit. Hopefully Gurgel – who’s known to slug it out despite his superior skills on the ground – will instruct him to fight smart.

As for how this fight will likely play out, it’s pretty clear cut. If Hazelett gets Daley to the ground, which might be easier said then done considering that Daley has a wrestling background, then he’ll end up getting a submission victory and becoming 1 step closer to a title shot. If however, he gets clipped in the process of trying to get the fight to the ground, he’ll be waking up, confused about his whereabouts, and hearing the sounds of Daley giving his post-fight victory speech.