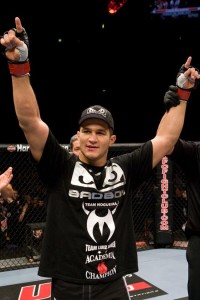 Originally slated to face Cheick Kongo at UFC 116, Roy “big country” Nelson may have bigger fish to fry as it looks as though he may be getting a shot against Junior Dos Santos at UFC 117 instead. Junior Dos Santos – who’s steamrolled over all 5 of his UFC opponents – will be a much tougher challenge for Nelson, but it’s a challenge that Nelson is welcoming with open arms – or shall I say, “closed fists”. Here’s what Nelson had to say about the possibility of facing “Cigano”..

“That might be a fight that might happen. I’m hoping, all you can do is hope…If you think about who’s out there fighting for the belt, or getting ready to fight for the belt it would be Brock (Lesnar) of course and Shane (Carwin), and then right underneath them it’s Dos Santos and Velasquez. So those are the four guys I’m looking for that can kind of catapult me right into belt contention.”

If Roy Nelson can somehow pull of a victory, then he’ll be right in title contention. However, that’s easier said than done as Dos Santos has looked nothing short of flawless in every single one of his fights. The key to victory for Roy Nelson is certainly not in a stand up war. If he has any shot of pulling this off, he’s going to have to close the distance and secure a takedown to negate Dos Santos’s boxing skills.

Once the fight hits the ground, we can only assume that Roy Nelson (being an accomplished black belt), will have the advantage. However, Junior Dos Santos, while not a black belt, trains under the tutelage of Antonio Rodrigo Nogueira – who’s perhaps the greatest grappler that the heavyweight division has ever seen. So, there’s a good possibility that he’ll be competent enough in BJJ to avoid being smothered and submitted. Neither of these fighters is known for having boring fights so the only sure thing here is that we’ll be entertained. It’s another solid fight with title implications added to an already solid fight card.