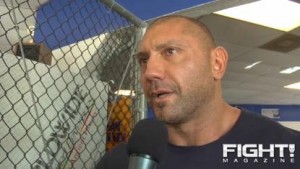 In this interview that Dave Batista did for Fight! Magazine, he discusses is mindset and preparation leading up to his mixed martial arts debut, which will likely be early 2011 and under the Strikeforce promotion. The whole pro wrestler to MMA thing is sort of gimmicky at this point but that’s not to say that it’s not entertaining. Brock Lesnar is the biggest draw in the UFC right now and that’s because of the crossover effect from pro wrestling. So, with that many people tuning in to see Brock, it only stands to reason that the pro wrestling fanboys will also tune in and pay their 50 dollars to see Batista as well. It’s actually a good thing for MMA because it puts more money in everyones pockets and draws more attention to the sport.

As for Batista and his chances, well, he’s not coming from an impressive amateur wrestling background like Brock Lesnar did. He mentions that he’s studied Kali, which is a weapons based martial art that originated in the Philippines. Unfortunately for him though, he won’t be able to bring those Kali sticks into the Strikeforce cage. On the plus side, he’s a huge, physically imposing individual that seems to be taking his training seriously.

He’s studying under the tutelage Cesar Gracie in an effort to develop his grappling skills. Throughout the interview, he doesn’t say one thing that would indicate cockyness or that he’s not taking the transition seriously. He recognizes the fact that there will be a lot of people that will criticize him for what he’s doing but he’s willing to prove himself and earn their respect. From start to finish, he seems like a class act throughout this entire interview.

When comparing mixed martial arts to pro wrestling, he says that MMA is a better fit for him because the hard part about pro wrestling, according to him, is the travelling and the wear and tear on your body. With MMA, he says, the training is enjoyable and if he can stay stationary, fight a few times a year and settle into a routine, then that would be a “dream come true”. He says he “doesn’t mind earning peoples respect” and based on the way he comes across in this video, it’s hard to criticize him.  Actually, it’s even hard not to root for him. Seems like a class act all the way so it should be interesting to see how his Strikeforce debut pans out.