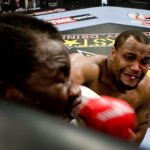 If you watched the UFC 121 primetime show, they showed Cain Velasquez working on his wrestling with an unnamed fighter at AKA (American Kickboxing Academy). At first sight, you wouldn’t think that a mid-sized, slightly chunky heavyweight would be able to prepare Velasquez for the mountain-of-muscle that is Lesnar but as we witnessed on Saturday night, Cain was able to handle Lesnar in all aspects of the fight (wrestling included).

While Cain Velasquez has a long history of amateur wrestling – which obviously served as the base for his success (as he was able to stuff Lesnar’s initial bullrush takedown attempt) – he had some world class tutelage from Daniel Cormier leading up to the fight. Daniel Cormier is a name that many aren’t familiar with but it’s only a matter of time before he gets into the spotlight.

He’s currently undefeated, sporting a 5-0 record, and he’s one of the best wrestlers in the sport. Ben Askren and “King” Muhammed Lawal are also top notch, Olympic calibre wrestlers that have made the transition into mixed martial arts. Daniel Cormier was the captain of the 2008 USA Olympic wrestling team and his amateur wrestling credentials are too abundant to even start listing here.

He’s fighting under the Strikeforce banner on an 8 fight contract and so far, he’s shown a lot of potential. Here some footage of a couple of his fights. Being a short heavyweight, it almost seems like he’d be able to cut down to 205, but we’ll see what the future holds (it seems to be a bright one)..