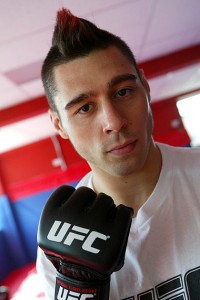 Here we have two guys with a “never say die” attitude in the cage. UFC’s matchmaker, Joe Silva, is doing a sick job setting up these “sure to be fireworks” fights. In their last performances, both Dan Hardy and Carlos Condit showed a tremendous amount of heart. They’re the kind of guys that would rather “go out on their shield” so to speak than give up and admit defeat.

We witnessed shades of greatness from Dan Hardy in his fight with GSP a few months ago. Not because he put on a dominant performance, but rather, because he was getting dominated and refused to give up. GSP was wrenching on his arm in a way that had every spectator who was watching the fight wincing at the thought of the pain that Hardy must have been experiencing. You know, sort of like when you watch a skateboarder miss his grind attempt, slip off the rail and land on his nuts.

Carlos Condit showed what he’s made of in his last fight against UFC’s youngest fighter, Rory MacDonald, back in June. He was getting dominated by the young Canadian for the first two rounds and following a tongue lashing from a pissed off Grey Jackson, he turned up the intensity in the 3rd and ended up finishing MacDonald with a barrage of strikes with only 7 seconds left in the fight.

Now, at UFC 120, these two guys are going to test their skills (and desire to win) against each other in a fight that will likely be memorable for years to come. A win for either one of these fighters will shoot them up the ranks in the welterweight division and you can bet that both of these guys are in it to win it and they have the title in their sights.

Both of these guys are extremely well rounded. They’re true, modern mixed martial arts fighters and their strength lies in not a single aspect of the fight game, but rather, in their ability to transition well between styles and put all the arts together. As for who wins this, it’s going to come down to who wants it more and who shows the most heart – something that they’re both known for. I’m predicting a hard fought fight right to a decision. As for who will get their hand raised at the end, well, it’s pretty much a coin flip in my opinion. The only guarantee with a fight like this is that it’s going to be incredible to watch.