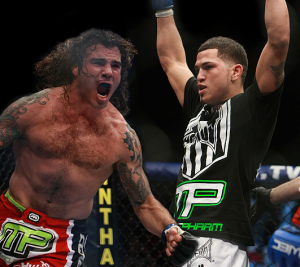 I personally haven’t seen very much footage of Clay Guida outside of his fights, which is why this particular video was so interesting to watch. We all know that most fighters have two different sides to them. When they’re competing, the ‘switch” is on as they’ve tapped into their primal instinct – which is to fight and inflict as much damage onto their opponent as possible. When the “switch” is off, they tend to be some of the most calm, level-headed guys around (since they use training and competing to “release” all their aggression).

Of course, there are a few fighters who are known to be just as aggressive outside the ring/cage as they are when they’re in it. You know, fighters who pick fights with skinny, untrained reporters and fighters who allegedly beat nightclub security officials to the point of a broken noses and fractured eye sockets over being refused entry.

Being as “wild” as he is when he’s fighting, I found it nice to see the calmer side of Guida. In the video below – which is the 6th episode of the “MMA Pro Watch” series – you get a behind the scenes look into his training camp at Jacksons submission fighting and also, you get to see him just hanging out at a minor league baseball game. He seems like a pretty cool, calm and collected guy. Check it out..