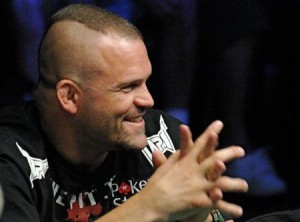 We originally thought we would be witnessing a clash between the current “TUF” season coaches but as it turns out, it will be Rich Franklin that will be taking on the “iceman” Chuck Liddell at UFC 115 in Vancouver, Canada. As for why the bout was changed, well, Dana White says that “something” happened during the filming of the show and that we’re all going to have to follow the series to find out what that “something” is.

Regardless as to why the original Tito Ortiz and Chuck Liddell fight has been called off, I think that Rich Franklin vs. Chuck Liddell is much more interesting. Reason being is that we’ve already seen Chuck Liddell outclass Tito Ortiz not once, but twice! A third fight between them when Chuck dominated him twice (the previous fights weren’t even close) doesn’t make any sense at all.

There’s name recognition and the casual fan might not have a problem paying 50 bucks for the pay per view, but those who have been following the sport for a few years (and who have already witnessed the two previous fights), we’re not impressed with the announcement of the Chuck Liddell and Tito Ortiz trilogy.

However, now we get Rich Franklin thrown into the mix and things get a lot more exciting. The name recognition is still there (so this will likely draw a lot of buyers) and not only that – it’s an intriguing match up as well. Both guys are legends who have been in the octagon with a who’s who list of fighters. And while both of these guys have racked up an impressive list of wins throughout their careers, both of them will be looking to rebound from devastating knockout losses.

As for how these two guys match up, well, they’re two of the most well rounded fighters in the sport. Despite popular belief, Chuck Liddell actually has a decent ground game. We just never get to see it as he uses his wrestling skills so well defensively to keep his fights standing – which is where he excels. I doubt Chuck Liddell will change his fighting style after all these years so you can expect him to come in with his usual “sprawl and brawl” mentality.

Fortunately for him, his “sprawl and brawl” approach may just work against Franklin. Rich Franklin is extremely well rounded, but he doesn’t excel at a certain aspect of the game. He doesn’t have a “weakness” per say, but his “strength” isn’t in a certain aspect of the game. Rather, his strength is how well rounded he is and how he puts all the aspects of fighting together so well.

That being said, Franklin has never been an extremely dominant wrestler and because of that, I think that Chuck Liddell will be able to dictate where this fight takes place. So, it’s most likely that this fight will take place on the feet and in that situation, Chuck Liddell has the slight advantage simply due to his knockout power.

That being said, the Chuck Liddell of today is NOT the Chuck Liddell that went undefeated for over 2 and a half years during his reign as the UFC’s light heavyweight champion. He’s taken some devastating shots and it looks as though his reaction time is on the decline. Dana White apparently feels the same way as he attempted to force Chuck into retirement as he was concerned for his safety.

Does Chuck still have it? If he’s able to pull off a victory over the always hard-fighting Franklin, then the answer is yes. If not, and if he drops his 5th fight in his last 6 outings, it may be time to hang up the 4 oz gloves forever.