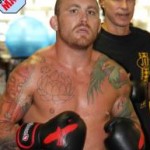 Chris Leben will have his hands full this weekend at UFC 132 as he takes on Wanderlei Silva, who admittedly, was one of his idols growing up. Dana White and the UFC organization has been encouraging the fighters to do some more self promoting via Twitter and of course, by putting up video blogs on Youtube. Well, judging by the fact that this was posted up on the UFC.com website the other day, I guess they’re happy with it and after watching it, I can see why.

Chris Leben was one of the contestants on the original season of the Ultimate Fighter reality show and due to his drunken antics, he got a bad rap that followed him for years. Lately however, his public image has changed for the better and he genuinely seems like a nice guy. Actually, I’ve been training here in Thailand with one of the students at the Team Quest gym where Chris Leben got his start and he confirmed that yes, Leben is the kind of guy who will buy everyone at the table he’s at rounds of drinks even though he doesn’t personally everyone.

In the the first video, Leben discusses how he got his start in the sport and how he was the 12th member to ever sign up at “Quest” when it was operating within an empty garage in the back of a car lot. I always like hearing how these guys got started so I can really appreciate this. Check it out for yourself..