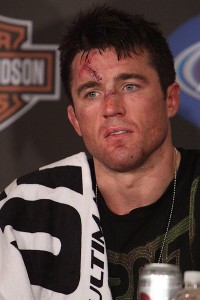 Things certainly haven’t been going Chael Sonnen’s way lately but in an effort to regain some media attention, he’s been “tweeting” some interesting comments about select fighters and the country of Brazil. His comments on the latter have gotten him perhaps more attention than he wanted as they made headlines in Brazil’s largest newspaper. If what he’s saying is true, and he’s actually in Brazil, then he definitely needs to be careful because as indicated by the national crime statistics, Brazil isn’t the most civilized place.

Regardless though, Sonnen is hilarious no matter how hard he “trolls” for a response and some attention. I really hope he straightens out his personal issues and gets cleared to fight soon because I could listen to his little rants for hours. Without a doubt he’s the funniest fighter in the UFC. Here are his most recent twitter comments..

Greetings from Sao Paulo! I’m learning the language: breakdancing in the Special Olympics is called capoiera and cocaine is called brunch

Machida is a gentleman. MMA is very cutthroat, and it’s sweet that Lyoto promised to never fight his girlfriend Anderson. That’s devotion.

I’d beat up Machida on the way to the ring to beat up Anderson, and I’ll kick Nogeria’s ass in the parking lot on the way to my after party.

I would never bash karate.Karate produced many MMA champions, most notably..um..Then of course, there’s..Wow, I thought this would be easier

Machida is not a bad guy; he’s a victim of the Brazilian education system. There are better ways to get electrolytes than drinking piss.

Brazil likes to boast that it’s the power seat of MMA, yet it’s so-called champions bow to the man behind “Under Siege 2.”…….. Classy.

I still admire Steven Seagal. Anyone that can be that self-possessed without doing a damn thing to earn it, knows something that I don’t.

Yushin and I are in Brazil to follow in Andy’s ways. Got ballet shoes, a team of has-beens, even brought a fat talentless celeb for trainer.

I could write a dissertation on this experience:”The Tragic Interplay of Delusion, Insecurity, and Incompetence: the Nog Brothers’ Story”.

Stay tuned for the sequel, “Help, an Asian Judako is Beating My Ass: The Anderson Silva Story