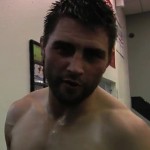 Carlos Condit has knocked off 3 straight wins in the UFC and on July 2nd, he’ll be fighting Kim Dong-hyun, who’s an undefeated Judoka riding a 6 fight UFC win streak. The fight has title implications for both fighters as the winner will make a case for hiimself to get the next shot at the welterweight title. In the video below, we get somewhat of an inside look into the “Jackson” camp where Carlos Condit trains. Condit’s teammates describe him as being mysterious and quiet and as Joe Stevenson put it, he reminds him of the “Stewie” character from Family Guy. Anyway, check out the video and remember that it’s just 1 episode from “the gym” series so there’s plenty of other episodes to check out..