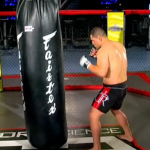 With Cain Velasquez being outsized in his fight with Brock Lesnar tomorrow night at UFC 121, he was invited into the “sports science” lab to put his other physical traits to the test. They measured his maximum heart rate, his lactate threshold, his punching power and the explosiveness of his takedowns. The results aren’t really that surprising. His lactate threshold was on par with “elite athletes” (you’d hope it would be seeing as how he is one) and his takedown power registered pretty high as well (again, he’s a two time division 1 All-American wrestler so no surprise there either).

What WAS pretty surprising is that Cain’s left hook registered more force (2,230lbs) than any professional boxer they have ever tested in the lab. When Rampage Jackson performed the same test, his hook registered in at 1,800lbs. It would have been a lot better had they tested Brock Lesnar too so we could get a comparison but even with the extra 30lbs or so, I doubt Lesnar’s punch would be as hard as Cain’s was due to his poor technique.