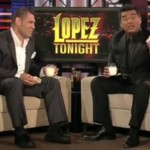 Now that Cain Velasquez is the new champ, he’ll likely be doing a lot more publicity – which is good because he seems like a cool guy. Never talks trash, seems laid back and just gets the job done come fight night. Of course, the Mexican-American community has their new posterboy, and rightfully so, so it’s not surprising that one of his first appearances was the George Lopez show.

Cain discusses his fight preparation leading up the fight and of course, the fight itself. The highlight of the interview however, was when George Lopez had a classic “American meal” brought out to Cain (in response to Lesnar’s pre-fight comments in which he expressed his desire to eat a Burrito and drink a Corona to celebrate his victory .. and Cains Mexican herritage). The meal that was brought out consisted of a peanut butter and jelly sandwich (no crust) and a wholesome glass of milk.