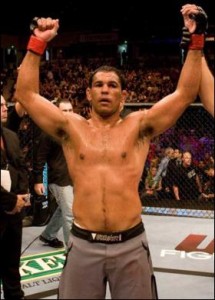 Not only do we get to see what will most likely be an epic showdown between Wanderlei Silva and Michael Bisping, but at UFC 110, we also get to witness a heavyweight clash between Cain Velasquez and Antonio Rodrigo Nogueira.

It’s already been stated that the winner of the fight between Frank Mir and Shane Carwin will end up getting the first shot at Brock Lesnar at the start of the summer but the fight between Cain Velasquez and “Big Nog” seems like a contender match in its own right. The winner of this fight will clearly get a shot at the title in the very near future.

Since he’s entered the UFC, Cain Velasquez has looked nothing short of dominant in all 5 of his victories inside the Octagon. Despite being a relatively small heavyweight, Cain Velasquez has been utilizing his superior wrestling skills to literally manhandle his competition.

Everybody who trains with Cain Velasquez seems to be touting him as being the “next big thing” – a catchphrase that ironically, was used to build up the character of Brock Lesnar back in his “pro wrestling” days. While Cain Velasquez’s strength is clear (that being his wrestling), his weaknesses are equally as apparent as he was clearly out-struck in his fight with Cheick Kongo.

Luckily for Velasquez, Nogueira has only ended 2 of his 39 fights with a knockout. He showcased much improved boxing in his most recent fight with Randy Couture but it doesn’t seem like Nogueira has the power in his hands to KO Velasquez – especially considering the fact that kickboxing sensation Cheick Kongo couldn’t put him out with the perfectly placed shots that he landed.

If Cain Velasquez is getting picked apart on his feet, I don’t believe he will have any trouble getting the fight to the round. However, how he will fare on the ground against the best grappler in the heavyweight division is what makes this fight interesting.

When the fight hits the mat, it will be a classic wrestling vs. Brazilian Jiu Jitsu showdown. Both of these guys are around the same size as well so the strength factor won’t come into play as it did in the fight between Brock Lesnar and Frank Mir – which is the last time we witnessed a heavyweight grappling match between a pure wrestler and a Jiu Jitsu fighter.

As for how this fight plays out, well, I see Cain Velasquez being able to take Nogueira down at will. He has never had difficulty getting the fight to the ground in any of his fights and I don’t think he will in this one either. However, how things play out once the fight hits the ground is a different story. Wrestler vs. Brazilian Jiu Jitsu practitioner, who you got?

Then again, I left out a few other things; experience a heart. The experience factor definitely goes to Nogueira and as for heart, Nogueira never ceases to amaze me. He seems to always come back and pull out victories from the brink of defeat. Cain Velasquez seems to have a fighters heart as well, but we just haven’t had much of an opportunity to see him perform under adversity – aside from the few big shots that he took in the Kongo fight. I guess we’ll get to see what he’s made of this Saturday.