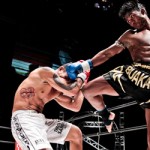 I’ve been searching online nearly every day since it happened and now I’ve finally found it. Here’s Buakaw Por Pramuk’s final fight in the 2010 S-Cup tournament. You have to just feel bad for Toby Imada while watching this. Imada has fought some pretty big names in some big MMA promotions (WEC, Bellator etc) but dispute all his MMA experience, he looked like a fish out of water here against Buakaw.

I actually saw Buakaw this week at the Bangkapi mall here in Bangkok. The IFMA world champions were taking place there and there was a huge tradeshow. Buakaw had his own booth there and was giving out posters and autographs. I would have got one, but since he was charging 300 baht for a signature, I spent the money on sushi buffet instead. He had his newly awarded S-Cup tournament belt with him. It’s pretty nice. Even nicer than his K-1 Max belts.