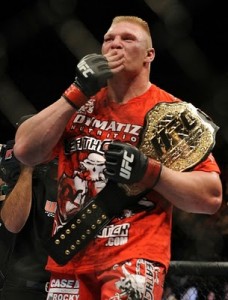 Brock Lesnar vs. Cain Velasquez for the heavyweight title could potentially be the most popular event the UFC puts on in 2010. Every time Brock Lesnar fights, pay per view revenues skyrocket due to the “pro” wrestling crossover crowd. The UFC will likely put big bucks into promoting this card as well and for good reason. The main event alone should be worth the price alone but in addition to the Brock Lesnar vs. Cain Velasquez showdown, we get to see Jake Shields make his UFC debut against Martin Kampmann.

Sticking to the topic at hand though – which is how Brock Lesnar and Cain Velasquez match up with one another – it seems as though Cain possesses the ideal skill set needed to strip Brock of his title. Brock Lesnar, who’s a dominant wrestler, has huge holes in his game that are apparent to basically anyone who has trained in a striking art for more than a week.

Due to this size and strength, he hits hard when he’s able to connect but in terms of speed, timing and technique, he has a lot of work to do. Brock’s striking is a massive weakness and it’s a weakness that I believe Cain Velasquez is going to exploit. Velasquez is the superior striker and he made that evident when he absolutely decimated “Big Nog” with a barrage of strikes in his last fight.

Cain Velasquez is just a lot more fluid and comfortable in the pocket than Lesnar. He does a good job at  varying his attacks with punches, knees, kicks and of course, takedowns when the opening presents itself. Brock’s offence, on the other hand, is purely based  on punches and takedowns. However, in this case, he may have a difficult time putting Velasquez on his back.

Like Lesnar, Velasquez is also an accomplished amateur wrestler. He was a two time division 1 NCAA “All-American” and was ranked within the top 5 wrestlers in the country on two separate occasions (2005 & 2006). Considering that Brock had a hard time in the grappling exchanges with both Couture and Carwin, there’s a good possibility that it might be a stalemate with Velasquez as well.

If that’s the case (and there’s a very good chance that it will be), then this may come down to a stand up war. This is Cain’s first title fight which means that he’s never had to go a full 5 rounds thus far in his MMA career. However, it doesn’t seem like conditioning will be a big factor for him since he hasn’t shown signs of fatigue in his fights up to this point.

Dispute being absolutely massive, Lesnar doesn’t seem to have much of a problem getting oxygen to those big muscles of his so I don’t see conditioning being a detrimental factor for him either. Based on how these two guys stack up, I can see Brock having a hard time getting Cain to the ground and then having a hard time in the striking realm of the fight.

Cain Velasquez is the toughest test for Brock currently on the UFC heavyweight roster. If Brock can make it out of this fight with his championship title still in tact, then he’ll likely reign over the division for a long time. That’s until Carwin starts eating more greens to prevent that “lactic acidosis” or until Dana signs Fedor or Overeem that is. Here’s a video preview to get you hyped up for the UFC 121 headliner..