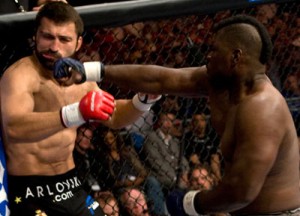 On May 15th in St. Louis, Missouri, two extremely powerful top 10 ranked heavyweights will clash for the Strikeforce heavyweight title. This will mark the first time that the heavyweight title has been put on the line in about 2 years due to the fact that Alistair Overeem’s non-exclusive contract allows him fight for other promotions and he’s been exercising that right by fighting overseas as of late.

If Strikeforce is looking to gain credibility and become a legitimate rival to the UFC, then there’s some aspects of their promotion that they’re going to have to clean up. The fact that their heavyweight champion hasn’t defended his belt in years doesn’t hold well for the credibility of the title.

And speaking of the title’s “credibility”, it doesn’t make any sense that Brett Rogers is getting a title shot while coming off a devistating knockout loss at the hands (the right hand to be specific) of Fedor Emelianenko. What if Brett Rogers wins? Are they going to set up a re-match with Fedor? Why not give the title shot to Fabricio Werdum or Antonio Silva instead? At least that way, you could set up a fight with Fedor for the winner.

Anyway, aside from the faulty match-making, I think this is an interesting match up. Both of these guys are extremely powerful strikers and if either of them lands a clean shot, they’ll likely put the other to sleep. Expect fireworks in this and don’t blink because someone is likely going to get knocked out.

In terms of who has the advantage in this fight, I think that Alistair Overeem is the more technical striker. He brings a more versatile attack and being a vet of K1, he’s been pit up against some incredible strikers. That being said, Brett Rogers has incredible power and it only takes 1 of those shots to land to end it all (as we witnessed in his fight against Arlovski).