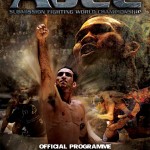 Just came across this video highlight from the ADCC that everyone should see. It was upload over a month ago so it’s nothing new but regardless, it’s worth watching if you love grappling. André Galvão was the big winner at the event winning both his division and the absolute. BJJ Hero’s has a complete listing and also provided the following insights of the event.

“The 2011 ADCC edition had many breathtaking moments such as the immense battle between the veteran Leo Vieira and the new blood Claudio Calasans that was considered by many of the spectators as “Fight of the Tournament”, while the “Cringing Moment of the Week” award (if there was one to give) would go to Vinny Magalhães and his armbar escape against Fabricio Werdum. Rousimar Palhares should also take the “Your Leg Would Look Nice Above My Fireplace” award after sending several of his opponents home on a stretcher for his devastating leg locks.”