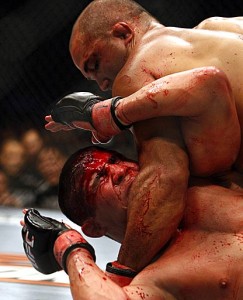 It’s not often that two champions – and top ranked fighters in their respected weight classes – square off against each other. However, that’s exactly what we’re going to see on super bowl weekend when BJ Penn clashes with George St. Pierre (“GSP”). This will be the second meeting between the two fighters. The first clash left George St. Pierre (“GSP”) the victor in a controversial split decision as he spent the night in the hospital while BJ Penn spent the night at a club.

Since their initial meeting at UFC 58, both fighters have vastly improved their skills sets. BJ Penn has been on a reign of violence as he’s disposed of Jens Pulver, Joe Stevenson and most recently, Sean Sherk. Not only has he been victorious, but he’s been so convincing in victory that his opponents have had a look of both frustration and hopelessness in their eyes. Joe Stevenson even broke down and cried in the ring due to the ego blow he sustained at the hands of BJ Penn as seemingly litres of blood poured down his face in a scene that resembled something from a horror film.

So How Does This Play Out

After re-watching their last confrontation, you have to give the edge to BJ Penn in the boxing department as he was winning most of the exchanges. With that being said, in terms of overall stand-up ability, it remains somewhat of a mystery as George St. Pierre (“GSP”) has the better Muay Thai. As for Brazilian Jiu Jitsu, BJ Penn once again takes the cake. BJ Penn earned the nickname “the prodigy” as a result of his fast-track to achieving a BJJ black belt. For most people, earning such a ranking can take upwards of a decade but BJ Penn earned his in less than half that time. The threat BJ Penn poses on the mat is completely unique as he’s somewhat of a contortionist as his incredible flexibility allows him to do things that others simply can’t – no matter how often they train. As Joe Rogan puts it, BJ Penn “uses his legs like arms”.

George St. Pierre (“GSP”) recently earned his black belt ranking in Brazilian Jiu Jitsu and the timing for doing so couldn’t be better. While BJ Penn may have the edge on the mat, George St. Pierre’s (“GSP”) knowledge of submission defence in combination with his strength and athleticism will likely neutralize the offensive ground attack of BJ Penn. BJ Penn is most threatening when he’s in top position on the ground as he’s able to perform what’s been called a “reverse guard” from the top due to the dexterity in his legs (watch the Stevenson fight). However, considering George St. Pierre’s superior strength and wrestling ability, the likelihood of BJ Penn obtaining that top position is highly unlikely.

The BJ Penn vs. George St. Pierre (“GSP”) showdown is truly an intriguing match up with all the elements to make it a “super fight”. There’s a history between the two combatants, both are currently top ranked fighters, both are champions and most importantly, their skills sets compliment each other very well because as we all know by now – “styles make fights”. I’m personally going with George St. Pierre on this one but that’s just me. He seems to be on the top of his game right now (as does BJ Penn) but most importantly for George St. Pierre, he seems to be in the right place mentally.