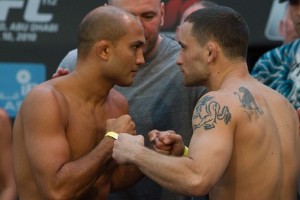 Aside from his family, his friends, and his training partners, most people didn’t think that Frankie Edgar was a legit threat to knock BJ Penn of his thrown atop the lightweight division. Well, due to a lacklustre performance from Gray Maynard – who many believed was the frontrunner for the next title shot – UFC matchmaker Joe Silva gave Frankie Edgar the nod instead and Edgar certainly rose to the occasion.

He used his superior boxing skills and slick lateral movements to outpoint BJ and in route to a unanimous decision victory. While BJ Penn has quite a few blemishes on his record, it was still seemingly unthinkable that Edgar, a kid from the Jersey Shore, had what takes to dethrone the champ – especially considering that BJ absolutely destroyed Diego Sanchez, Kenny Florian, Joe Stevenson and Sean Sherk in his previous 4 fights within the 155 pound weight class. Prior to his fight with Edgar, BJ Penn’s last lost in the lightweight division was back at UFC 35, which was about 8 years ago.

When considering BJ’s dominance within the division, it comes to no surprise that he’s getting an immediate rematch. I personally think it’s unfair that Frankie Edgar has to prove himself twice, but I’m sure he sees it as a blessing as he now has the opportunity to silence the critics that are claiming that his initial victory was a “fluke”.

It should be interesting to see how these two guys adjust their strategy for the rematch. I imagine that Edgar is going to try to do more of the same, but for BJ, how will he deal with the allusiveness, crisp boxing and footwork that Edgar brought to the table back at UFC 112. BJ Penn has already started the war of words as he recently made the claim that Edgar “ran from him the whole fight” and that Edgar’s corner men persuaded the judges to rule in his favour. That doesn’t sound like BJ, does it? Making excuses following a loss. I’m shocked.

Well, come next Saturday night, all the talk will be meaningless when the cage doors close. Will BJ Penn be able to secure top position on Edgar or will Edgar be too illusive to get to the ground? BJ Penn is still a heavy betting favourite in this despite the fact that Edgar outfought him only a few months ago. I think “lightning can strike twice” so to speak and since a bet on Edgar will pay out 2.5x your initial bet, it seems like a smart choice to me..