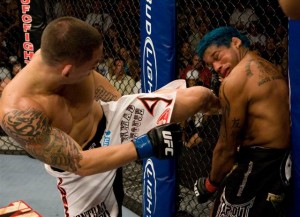 Zuffa is giving us 2 title fights featuring 2 of the best pound for pound fighters in the world this Saturday night at UFC 112. However, with such dominant fighters defending their belts, will the fights even be competitive? Well, we’ve already analyzed the Anderson Silva vs. Demian Maia fight so lets have a look at the lightweight showdown between BJ Penn and Frankie Edgar.

Frankie Edgar recently earned a title shot against BJ Penn by going 6-1 so far in the UFC and in his most recent fight, he choked out the previously undefeated Matt Veach in a victory that earned him a “fight of the night” bonus (in addition to a title shot of course).

However, while Frankie Edgar has looked impressive thus far in his UFC career, BJ Penn seems as though he’s in a league of his own in the lightweight division. He hasn’t lost a fight at lightweight since he dropped a decision to Jens Pulver about 8 years ago. Now, it seems as though BJ Penn is fighting for his legacy and like Dana White and Joe Rogan say over and over again, a focused, in-shape and motivated BJ Penn is just scary!

In his last fight, BJ Penn absolutely dominated a seemingly-game opponent in Diego Sanchez. He landed 150 of his strikes (all at high accuracy) and according to “Fight Metric”, Diego only landed 8 shots on BJ. It was pure domination. But that’s not a new thing for BJ Penn. He’s been severely dominating his lightweight counterparts for years, sometimes even leaving them a bloody mess in the ring as tears stream down their face (Joe Stevenson for example).

Frankie Edgar is a well rounded opponent. He explosive, he has an impressive amateur wrestling background and he has quick, powerful hands. However, BJ Penn’s boxing (and overall striking ability) has never looked better and with Frankie Edgar holding the rank of purple belt in Brazilian Jiu Jitsu, the ground game is something he is going to want to avoid seeing as how BJ Penn is considered to be a BJJ phenom. For those who don’t know, BJ Penn became the first non-Brazilian to win the World BJJ Championships in Rio, and he did so with only 3 years of training (it takes most people 10 years to even earn a black belt).

Even with his wrestling background, I predict that Frankie Edgar will have some problems taking BJ Penn down (even if he wanted too) since BJ Penn’s takedown defense is on such a high level. So, if Frankie Edgar is getting the worst in the stand up exchanges, he might not be able to get the fight to the ground. On the other hand, BJ Penn is so well rounded that he’ll likely be able to take the fight wherever he wants. And if the fight happens to hit the ground, Frankie Edgar could very well end up being submitted – the same can’t be said for BJ Penn.

However, while BJ Penn is the heavy favorite on paper, you can never count a guy like Frankie Edgar out. He’s a fighter and in a fight, it’s not about which guy has accomplished more in the past. Rather, it’s about who happens to be the better fighter the night of the fight. And of course, that will be seen on Saturday night at UFC 112.