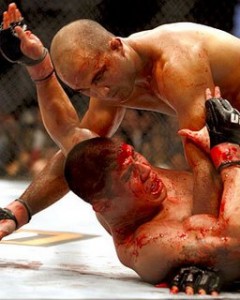 The BJ Penn vs. Diego Sanchez fight – which is set to take place at UFC 107 in December – is going to be incredible. The trash talking hasn’t kicked it yet but with these two guys, you know it’s just a matter of time. Come December 12th, I have a pretty good feeling that this fight is going to be pretty personal.

BJ Penn – who’s hasn’t lost in the lightweight division in almost 8 years – will be putting his title on the line for this one. He’s looked incredibly dominant at 155 pounds and he redeemed himself from the only loss that he does have the division when he toyed with, and humiliated Jens Pulver at the Ultimate Fighter 5 finale back in 2006.

Since that redemption, he’s blown through Joe Stevenson, Sean Sherk and Kenny Florian. All of those guys are top competitors and BJ Penn made every one of those fights look extremely easy. The disheartened look in their eyes after being dominated says it all. Joe Stevenson was even reduced to crying in the ring right after the fight. Tears and blood poured down his face and to add insult to injury, BJ Penn licked Stevenson’s blood off his 4 ounce gloves.

With Sherk, BJ Penn did the same thing. He approached him, wiped some of the blood from his beaten face and then licked it off his gloves. In his latest fight, he dominated Kenny Florian – who I personally thought would give him a run for his money. I mean, Florian is the more versatile striker, he’s a BJJ black belt and while his ground game isn’t on the same level as Penn’s, I figured he would at least be able to hold his own and avoid being submitted.

I was wrong. Kenny put up a fight and made it to the 4th round but eventually got submitted via a rear naked choke. As submission that actually ended up putting tens of thousands of dollars into Penn’s bank account as he earned the “submission of the night” honours for it.

That being said, his best asset is the most important asset a fighter can have – he has heart! Diego Sanchez has been in some wars and no matter what happens, no matter how outmatched he is, he’ll never give up. Now that’s something that can’t be said about BJ Penn. Diego has never been knocked out, he’s never been submitted he’s gone the distance 7 times in the UFC and 6 of those fights have been incredible, back and fourth wars!

While clearly outmatched on the ground, Diego Sanchez brings in a more versatile striking attack. BJ Penn relies purely on boxing and you’ll rarely ever see him mix up his attacks with kicks and knee strikes. Diego on the other hand is coming off a victory over Clay Guida in which he displayed some awesome Muay Thai skills and even landed a technically sound head kick to Guida which to everyone’s surprise, didn’t knock him out.

So to break it down, BJ Penn has better boxing while Diego more versatile striking skills. Diego has better wrestling but I highly doubt he’ll be able to take BJ Penn down due to his flexibility – nor would he want too. BJ Penn is an incredible Brazilian Jiu Jitsu practitioner so he clearly has the advantage on the mat. Diego has more fights, but BJ Penn has been in the “big show” a little more often.

Diego has the intensity and the heart, while BJ has the technical skills. The odds makers will likely have Diego Sanchez as a heavy underdog and when the odds to come out, it might be a good bet. But it’s personally not a bet that I’d make simply because BJ Penn is just THAT good! I can’t wait for this one.