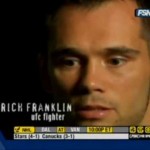 The Ultimate Fighting Championship (UFC) and the sport of Mixed Martial Arts in general has seen dramatic increases in popularity over the past 2 decades. With the organization hosting a live attendance of over 50,000 spectators at UFC 129 (an event which was sold out within a couple of hours), it’s clear that MMA has the potential to become the most popular sport in the world. Dana White has even said that his competition at this point isn’t the other fight promotions but rather, his competition is the NFL, the NBA and MLB – the established sporting organizations that appeal to his target audience.

When you consider what we’re dealing with here and the fact that fighting (and wanting to watch it) is natural for males (and has been since the beginning of time), there’s no denying the fact that MMA has a legimate shot at surpassing the popularity of the aforementioned “ball” sports that are simply games without the historical significance that COMBAT has.

Considering how for the sport has come and of course, where it’s going in the future, I figured I would post up the “beyond the glory” documentary on the UFC because it’s a great way for fans to learn about the history of the sport and the UFC as an organization. Check it out..